WELCOME TO BENZIE COUNTY CENTRAL SCHOOLS FEATURED FRIDAY ALUMNI. Today we would like to recognize Benzie Central 1988 Alumni, Brent Crossman. Brent graduated from Benzie Central in 1988. As a student, he participated in Football, Basketball, and Baseball. During his Senior year, Benzie made it to the football playoffs for the first time, and he was also on the 1987 basketball team that finished runner-up in the Class C state championship game.
After high school, Brent attended Northwestern Michigan College for two years. In August of 1990, he transferred to Western Michigan University to pursue a degree in education. One of the main reasons he went into education was the impact his teachers and coaches had on him while at Benzie Central.
After graduating in 1993 from Western Michigan University with a History Major and a Social Studies Minor, he accepted a teaching job at Kalamazoo Central High School where he taught in the area of World History. During that time, he also was assistant Varsity girls’ basketball coach at Portage Northern High School.
In 1995, he accepted a teaching position at Charlotte High School, where he and his wife Julie have taught for the last 22 years. While at Charlotte High School, he has coached Freshman baseball, JV girls’ basketball, Varsity girls’ basketball for 9 years, and is currently the 7th grade girls’ basketball coach and head boys and girls golf coach.
In 1999, he earned his Master’s degree in Curriculum from Michigan State University.
Brent is an integral part of Charlotte High School and his community. When he is not in the classroom, or coaching, you will find Brent volunteering and advocating for the American Cancer Society. He is the Relay for Life Advisor for Charlotte Schools and his club has raised over $100,000 for the American Cancer Society since 2004.
In 2015, he was awarded the Excellence in Education Award from the Charlotte Chamber of Commerce for his community work for Charlotte Public Schools.
In 2016, he was selected as teacher of the year for Charlotte Public Schools.
He and his wife Julie and thier two children, Lauren and Elise, have resided in Charlotte since 1996.
As always, like, love and share.....Brent, we are #OneBENZIE proud! 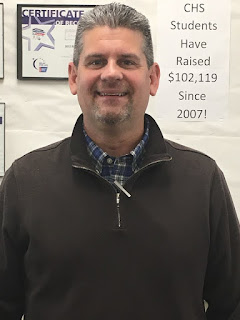