“In the beginning of high school, I wasn’t a very good student nor was I at a good place in my life in general. It wasn’t until I had Mrs. Huddleston for 10th grade Biology that this began to change for the better. Every single day, she pestered me asking when I was going to join AP Biology. I really didn’t understand at the time. All I did was sleep in her class, I never did the weekly research write-ups – I was the quintessential slacker. She saw something in me that I couldn’t. Eventually, I conceded and signed up for the class the next year.
In an odd way, I’m a very competitive person. In not putting effort into being a good student, I reasoned that it couldn’t be said that I’m less intelligent that anyone else, just that I didn’t try as hard. When it came to AP Biology, the class itself was the culmination of an entire year’s worth of expectations and beliefs – I wanted to do well for the sake of Mrs. Huddleston. The effort I put into that course was the most effort I’d put into anything in a long time. That’s not to say that I completely changed as a person (I rarely turned in the weekly notecards) – I was, and still am, a flustered mess that tends to procrastinate. I’ve just learned to procrastinate work with work I like more. The experience, however, seeped into the rest of my life and I found myself with a competitive drive to do well in anything I do. My grades vastly improved, and I found myself joining the other (4) AP courses the following year.
Biology will always hold a special place in my heart – If I hadn’t met Mrs. Huddleston, I would not be anywhere near as successful as I am now. However, I found myself liking the math courses more. I’ve never had a great memory, and I loved that with math you can develop the intuition and notice patterns to derive anything you might need. Also, I also have to credit a large chunk of this love to two teachers in particular, Mr. Seymour and Mrs. Kangas. Their goofiness and structure (respectively) and passion cultivated my fondness of the material. In a similar manner to Mrs. Huddleston, they also believed in my capabilities – I was allowed to join AP Calculus at the same time as Pre-Calculus to make up for lost time, which set me on the path I’m on now.
Along with being an undergraduate at Michigan Tech, I am a math tutor and a researcher in our biology department under Thomas Werner (where I work to understand fruit fly color patterns and mushroom toxin resistance). I also just got notification that I received funding to work by our math department to do research this summer! I will be working with objects known as tree-like tableaux in an attempt of understanding how many tree-like tableaux are associated with a given partition. Now forget all of those words, and instead imagine drawing dots in empty boxes, such as in the figure below. Under certain constraints, such as every row and every column has to have a dot, I want to count how many ways you can do this. These structures for some reason have connections to topics in theoretical physics, bio-polymerization, etc., which is why we’re interested in them! 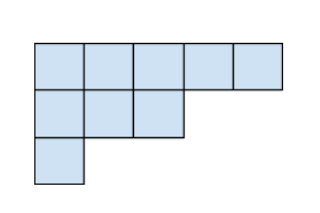 I am forever indebted to the teachers of Benzie Central -  I owe the clarity of my choices to them. My majors are in dedication to those individuals, and I plan to get my PhD so I can become a professor and hopefully pass it on.

Advice, take all the AP courses and college courses you can (reasonably). I wouldn’t have been able to double major in 4 years without the extra credits, and they let you get to the interesting classes quicker.
When it comes to college, the biggest tip is to go places and meet people. Go to class. Go to office hours. Go to clubs. Meet classmates. Meet professors.
I have had classes where I already knew most of the material. I still went and took notes. People tend to, once they recognize material, assume they remember a lot. There are always details you have forgotten; and better to fix that in class than in exams. But more importantly, meet people from your class (or your major in general). It is invaluable when deadlines are coming down, to have people to turn to.
Speaking of people to turn to, go to office hours! The professors are often just sitting there twiddling their thumbs, and you showing up saves them from some boredom. Professors tend to be a bit nicer to students who they see are putting in the effort (participate in class as well). If you aren’t convinced, ask Mr. Kubit about the psychology of positive associations. I started my current research project and was given a job application by forming relationships with my professors. Try to show up with something to build off of (not just a blank page), but if you are hopelessly….. lost go anyway.
If you are interested in something, seek it out. Go to clubs, go to events posted around campus. This isn’t even college, (it was still in HS) but I loved my participation in Science Olympiad (shout out to Mr. Kinnan – I’m looking into getting a pet Chilean Rose tarantula this summer when I move off campus). Don’t be afraid if it’s out of your realm: I just participated in an AI competition and I’m only in my second computer science course ever, and it was so much fun even with 9 hours of broken code. (We still almost took 3rd place!).
Overall, what I want to convey is this: if you stumble across an opportunity that motivates you, take it and run with it, even if it’s somewhere you didn’t expect. I worked as a dishwasher (at The Fusion in Frankfort) and transformed that into a position as a sushi chef in 2 summers, and it still feels weird to say those words. I didn’t really feel like the restaurant industry was for me, but I cherish the experience and the people I met. If I had to predict what I went to college for in elementary school, it probably would have been more along the lines of literature/arts. I was nose deep in a book all the way up to high school and I loved to draw. If I had to predict in middle school, it would’ve been game development. I started playing games at the age of 2 with Pokemon Snap (thanks to my older brother) and always will. Now, I’m some amalgamation of math and biology, and I couldn’t be happier with that choice.  Last but not least: if you need help, don’t be afraid to get it.”

Marshal, your story is one we are so very proud to share and your advice is something that we could all benefit from in various areas of our lives. We at Benzie Central are rooting for you, now and always.  Mrs. Crossman says, LIKE, LOVE, and SHARE and celebrate Marshal.  #OneBENZIE AWESOME! 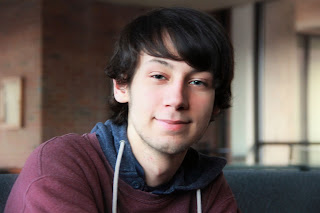