WELCOME TO BENZIE COUNTY CENTRAL SCHOOLS FEATURED FRIDAY ALUMNI.  Today, we would like to recognize Eric Caugh, Class of 1989.

While at Benzie Central, Eric had a nerdy appreciation for most of his classes and he enjoyed being pushed and challenged academically by teachers and his classmates. Some of the teachers who had a positive impact on Eric include Priscilla Belden, Jim Sheets, John  “Vas ist das?” Gehring, Will “lit a match to check his tank” Lynch, and Bruce Plont. He was involved in National Honor Society, student council, and the senior trip to Chicago. During the summers, Eric worked various jobs, including the Sport Shop of Beulah, The Hungry Tummy, the KOA campground across from Riverside Canoe, and The Sail Inn restaurant.

Eric was also involved in sports while at Benzie. He competed in basketball, football, and track and field (shot put, discus, and whatever relays Coach Moss needed a warm body for). In his last relay, Eric ran the 800 in a medley. He is expected to cross the finish line sometime this June. (Ha!Ha!) Eric even wrestled for half a season, “winning” 3rd place in the district tournament without ever beating a single opponent in his entire wrestling career.

After high school, Eric followed in his older brother Kurt’s footsteps and attended Alma College. At Alma, Eric studied history, political science, and English, and almost everything else that did not have a required lab.  He was active in a local fraternity (Zeta Sigma), Model UN, and IM sports. Most importantly, Eric met his wife, Sara, at Alma College.

After graduating college in 1992, Eric worked for the American Red Cross as a blood-services coordinator and HIV/AIDS educator in Alma, Michigan before enrolling in law school at the University of Michigan. Eric’s decision to go to law school can be traced back to Jim Sheets’ history class, when Eric was a lawyer in the mock trial of the Dred Scott case.

During law school, Eric had internships at law firms in Grand Rapids, Michigan and Minneapolis and ultimately accepted a permanent job offer at the Minneapolis firm, Zelle & Larson. Except for a short detour to help launch a different firm, Eric has spent his entire career with Zelle. Eric’s focus as a lawyer is on complex civil litigation and dispute resolution. Over the course of his career, Eric has tried cases and resolved disputes all over the country involving various issues, including: environmental, asbestos, insurance coverage, tobacco, rails-to-trails property takings, First Amendment/religion, intellectual property, and securities. Eric does pro bono work for the Appellate Self-Help Clinic through the Minnesota State Law Library.

Outside of work, Eric serves as a youth leader, confirmation teacher, and board member of Westminster Presbyterian Church in downtown Minneapolis. Although not much of a world traveler yet, Eric has traveled to Cuba with the church.  Eric is also the co-chair of the Minneapolis Idea eXchange for the Minneapolis Downtown Counsel.

In his downtime, Eric enjoys spending most nights on the sideline of a soccer pitch somewhere in Minnesota, either watching his kids play or watching Minnesota’s new MLS team, Minnesota United FC.

Although Eric has not lived in Michigan in over 20 years, he still considers Benzie County home and tries to get back whenever he can. He is especially thankful for all of the opportunities he had at Benzie Central and the foundation it gave him.

Eric’s has two pieces of advice for his children, Lauren and Patrick, which also may be helpful to current students at Benzie: “First, be yourself and let others be themselves. You are unique, just like everyone else. Embrace what makes you you and respect others for being themselves. The sooner you get comfortable with who you are, and let others be who they are, the more content you will be in life.

Second, be kind to everyone, including yourself. Kindness costs nothing but it can make a difference. In a world where snark and sarcasm are commonplace, acting with kindness sets you apart.”

Thank you Eric, for sharing you amazing journey with us.  We are #OneBENZIE proud of all of your accomplishments and are pleased to always be a part of what you consider to be, “home”.

You absolutely know how Mrs. Crossman feels…like, love and share! 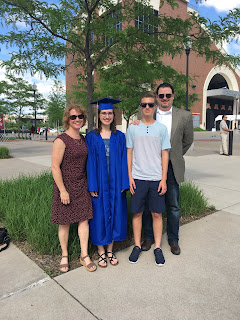